Behind the Red Door: Elizabeth Arden Opens a Flagship Boutique and Spa on Union Square 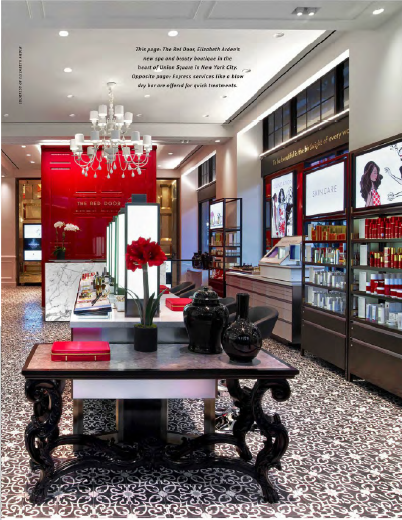 Elizabeth Arden opened the first Red Door Spa in 1910 on Fifth Avenue. Her vision revolutionized the beauty industry with an all-American brand that combined skincare technology with a relaxing spa experience. By the 30s, Arden had opened locations in most of the important fashion capitals around the world.

To revitalize its image, Elizabeth Arden introduced new product and got back to what it does best, skincare technology. It also contracted New York-based TPG Architecture to give it a new presence in the city.

A site in Union Square, formerly occupied by Rothman’s menswear store, was selected for the new Red Door concept. The site selection was perfect; Union Square is the bustling hub of downtown, and the landmark building was constructed at the time Arden’s company first expanded worldwide.

According to Alec Zaballero, principal at TPG, “We wanted to create a welcoming environment. Having solid red doors at the entry would be a visual and psychological barrier for the customer. An early decision was to express the red doors in a different way, as scaled down enamel badges on the doors. We took the red door from a literal door to an iconic mark that symbolizes the brand.”

To create a spa that embraces the company’s legacy as an American brand, TPG celebrated the period details of the building, most notably the clerestory windows above the entry. In the 30s, few commercial builders installed awnings above windows or doors, so, unlike neighboring retailers on the square, TPG left Red Door’s clerestory windows unencumbered.

The retail section of the spa is strategically positioned front and forward. Upon entering the 2500-square-foot first floor, customers are immediately engaged with cosmetic, skincare and color product, seamlessly intermixed with service offerings. This provides two immediate results: customers recognize the space as a retail store, and related sales of product and services are promoted.

Underfoot, a patterned cement encaustic flooring tile, inspired by the work of high-society interior designer Dorothy Draper, provides a functional, feminine feel. Additionally, a coffered ceiling treatment pays homage to the architecture of the 20s and 30s. Complete with moldings and cornices, the new ceiling appears to be part of the building’s original condition.

The cashwrap was repositioned away from the entrance, providing a more upscale and welcoming environment. A club-like hall table now greets customers entering the spa. The eponymous entryway door was strategically moved to the interior of the space where it covers an existing elevator shaft, and is visible from across Union Square Park.

The first floor service areas, including blow bars and nail stations, are designed to be fun. Textured faux leather chairs, glass tiles and etched mirrors provide a boutique hotel feel. A brand statement is made on the back wall with a dimensional wallcovering suggesting the pattern of the well-known Elizabeth Arden gold compact.

Like an urban retreat, the new Red Door appeals to the upwardly mobile working woman, who might wish to escape the hustle and bustle of the Big Apple without losing her New York point of view.

Receive updates from MGI straight to your InBox.